Who Is Liable in a Truck Accident? 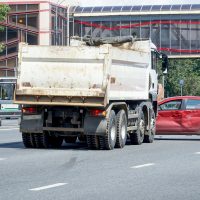 Accidents involving commercial vehicles tend to result in more complex legal proceedings than accidents involving privately-owned autos. If you were hit by a long-haul trucker in a semi, tractor-trailer, eighteen-wheeler, delivery truck, or other large commercial truck, it’s important to identify all parties who may be responsible for your medical bills and other damages. Continue reading below for a discussion of the parties who could be held liable and under what circumstances they can or should be added to your claims. Call a seasoned Southern California truck accident lawyer for advice and assistance after a large truck crash in Los Angeles or Orange County.

Parties Who May Be Liable After a Truck Accident

There are a number of parties who might be held liable after a truck accident. The first (and most important) question is: What caused the crash? If an auto driver ran a stop sign and collided with a semi, then the auto driver is clearly to blame. If, however, the truck driver caused the crash because they were drowsy, distracted, drunk, otherwise driving negligently, or driving a defective truck, then there may be several parties to hold responsible for the accident.

Depending on the circumstances of the accident, several different parties might be solely or jointly liable for the truck crash, including:

If you or a loved one was seriously hurt or worse in a trucking accident in Los Angeles or Orange County, call Machtinger Law for advice and representation from a diligent, compassionate Southern California truck accident attorney.

By Machtinger Law APC | Posted on September 9, 2022
Our Areas of Practice
What Our Clients Are Saying
“He fought and resolved my case 100%”

I had a life-changing incident, and my lawyer John Machtinger was spectacular. He fought and resolved my case 100%. He was capable, honest, and professional....

D.V.
“Thank you so much for working so hard”

Thank you so much for working so hard on Robert’s case. He was thrilled with his settlement. You always made us feel so comfortable when...

I have the best attorney... Thank God I have you representing me.

E.C.
“Thank you so very much for taking such good care of me”

Thank you so very much for taking such good care of me. I’m a “Happy Girl”. You did a great job.

P.T.
“You were a great advocate for our cause”

You were a great advocate for our cause. My Dad would have been pleased with the outcome.